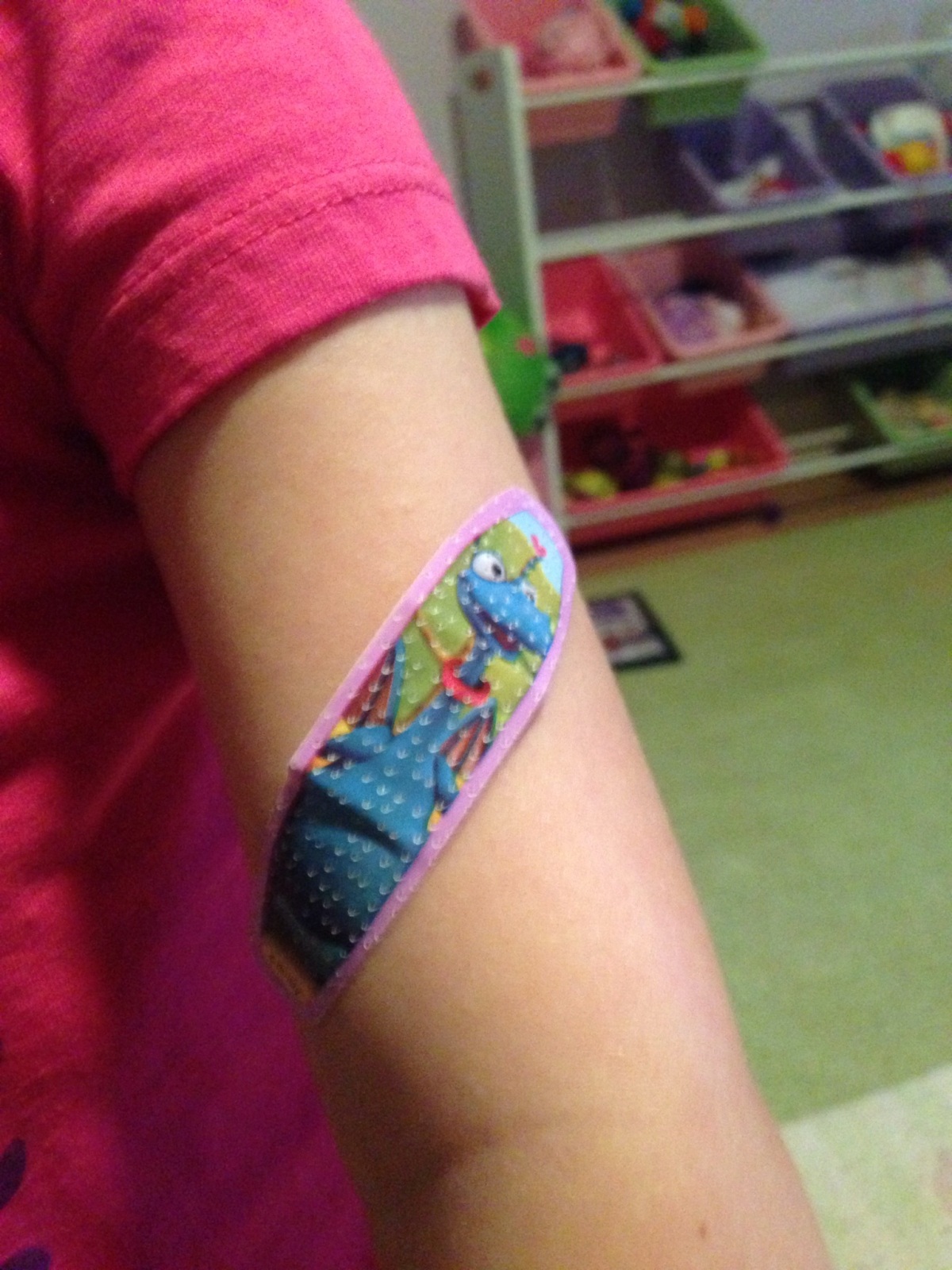 A couple of days ago, I had the unicorn of parenting experiences: a tear free visit to the doctor to get a flu shot!  My two and a half year old twins were actually excited to get their shots.  Yes, you heard that right, excited.  As in I briefly mentioned to them that after nap we would be going to the doctor to get shots and when they woke up, Curly said to me, “Mama, is it time to get shots now?!”

In fact, we went to a flu shot clinic and there was a wait, so I said we could go get dinner while we waited and that was when they got upset… because we were leaving the building without getting our shots.  I had to promise that we would come back after dinner and they would in fact be poked with needles.

And the actual vaccination experience?  Great!  Curly went first and while she flinched a tiny bit at the actual shot, there were no tears, because she was eagerly anticipating her Band-aid and sticker.  Flopsy went to the table willingly, cried for about 30 seconds after the needle went in, and was perfectly happy by the time we left.  Then we met their daddy for ice cream.  All in all it was a lovely afternoon, unlike last year’s flu shot debacle, which involved Stage 5 meltdowns from both girls and myself.

I wish I could attribute this stellar behavior to my superior parenting skills, but alas the credit goes to whatever genius came up with Doc McStuffins.  Yes, Disney Jr., home of the good doctor, is now my favorite channel ever because my kids are obsessed with going to the doctor, pretending to be a doctor, saying they want to be a doctor when they grow up, and apparently with getting shots.  The first thing they said was that it would be “just like on Doc McStuffins.”  I jumped on that bandwagon with both feet and my bells on.  I let them watch an extra episode on TV that day and loudly led a “Time for the Check-Up” sing along in the car. I even bought Doc McStuffins Band-Aids for them to use on the boo-boos.

I have to pause here and say that when they were first born, I was that parent that was all, “Absolutely no screen time until 2 or their brains will rot and fall out of their heads.”  If you took that approach and were able to stick with it, then more power to you!  I, however, kind of relaxed those rules around 18 months when I realized just how much I could get done during 15 minutes of Sesame Street.  And then as they got older but were still waking up at the crack of dawn, an entire 50 minute episode gave me a beautiful semi-quiet time to mainline some coffee and become a mostly functional human being.

Now, while I still try to make sure we don’t spend all day in front of a screen, I am starting to realize just how much they pick up from the blessed moving pictures machine.  And despite all of the TV naysayers, some of that stuff they pick up is pretty awesome.  Like the time Flopsy said that something was “humongous” and when I gave her a funny look, she said “that means big, big, big, Mommy.”  I know that, but how do you?  You are 2 and 1/2!  Sesame Street!  It’s also where Curly learned the word camouflage, which she thought she was doing when she hid behind a sheer curtain.  Not quite kid, but maybe if you keep watching, you will have the more subtle language nuances down by 3!

So if Doc McStuffins makes them want to be a doctor, I say Hooray!  I am so glad there are TV choices out there that get kids to aspire to real careers.  I mean, if they say they want to grow up and be a princess, I’m not going to tell them that is totally impossible- but we should probably start running in different social circles.  And if Angelina Ballerina gets them hyped up for their ballet class, then she can pirouette her way into our living room anytime.  Now, if someone can just get Cailllou cancelled, our TV experience would be perfect.  For some reason they love that whiny bald kid, and that show seriously makes me want to start drinking at 10 am!